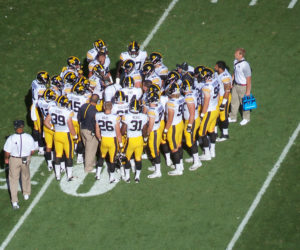 The president of the board that oversees the University of Iowa is stiff-arming a state legislator’s attempt to forbid the Hawkeyes from hosting a Friday night football game.

Rastetter said there’s an important tradition of having high school football games on Friday nights in Iowa, but this is a unique situation. The Big Ten plans to schedule six Friday night games per season, though at least the 2022 season. State Representative Peter Cownie of West Des Moines has sponsored a bill that would forbid the Panthers, Cyclones and the Hawkeyes from hosting home games on a Friday night.

Rastetter said during a weekend appearance on Iowa Public Television’s “Iowa Press” program that each athletic department should make those kind of scheduling decisions. The bill, if it became law, would ban the Iowa-Nebraska game that has been held on the Friday after Thanksgiving for the past several years.

“One of the things that isn’t often recognized is that athletic departments do contribute to the university in a significant way,” Rastetter said near the end of the program. “I mean first of all, they pay scholarship dollars on tuition, room and board to the university. Second, it becomes a huge fundraising opportunity at the universities to bring alums, donors in that results in significant investment in the university.”

But Rastetter said there is a “national trend” among premiere university football and basketball programs to help finance other campus priorities.

“There are ways that it can enhance the student body, lower student fees, scholarship funds beyond that,” Rastetter said. “But at the end of the day, they need to be careful that they not limit their ability to compete by taking too many dollars and then they won’t have the revenue stream to give the dollars.”

Rastetter said neither tax dollars or student tuition money is used to finance the athletic programs in Iowa City, Ames or Cedar Falls. Ticket sales and contributions from donors are the sources of income for the Iowa and Iowa State athletic departments. The University of Northern Iowa uses some student fees along with ticket sales and donor money to run the Panther athletic department.