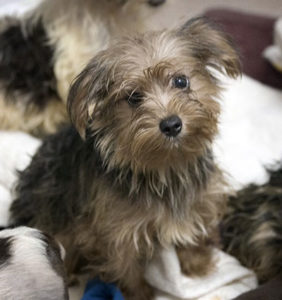 Iowans are being warned about a puppy scam that cost an Omaha-Council Bluffs woman several hundred dollars.

Free Yorkie pups were being offered in an online ad, free except for the transportation costs. Pam Wiese, with the Nebraska Humane Society, says this kind of thing happens all too often.

“It was a scam where somebody put some money down on a puppy and then the puppy wasn’t actually a puppy,” Wiese says. “Buyer beware, that’s what we advise people, whether you are buying a dog from a reputable breeder, whether you are looking at an animal from a rescue or a shelter.”

In this case, the woman received pictures from a man claiming to own the puppies. He requested she send money, in excess of $500, for transportation costs. She complied, but never received the dog and the seller has vanished. Wiese says there are several red flags in the scenario.

“A sight-unseen amount of money down for a puppy that you may or may not bond with might not be the best idea,” Wiese says. “Go to where the puppies are. Play with them. Depending on which one tugs at your heart, that will be the one that you wish to take home. You may not get that simply looking at them online.” Investing in a pet shouldn’t be taken lightly, she says, and likely shouldn’t be done exclusively online.

“You’ll want to see the animal itself and see if you bond with it,” she says. “If you’re going the breeder route, you want to make sure they’re responsible and that they’re doing it appropriately. The best way to do that is to actually visit the facility instead of simply sending in money.”

Check out the conditions and make sure you’re not perpetuating a “puppy mill” scenario. She says legitimate breeders typically have no problem with potential buyers wanting to visit.