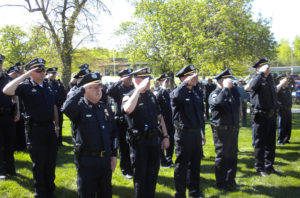 The emotions at the annual Peace Officers Memorial Ceremony near the Iowa State Capitol were especially raw today with the recent death of a deputy in the line of duty.

Department of Public Safety Commissioner, Roxann Ryan, made note of that during her opening remarks.

“This is always a time for heartfelt remembrance — but this week brought yet another stark reminder of the grieving that we experienced each and every time that we lose an officer. We lost Pottawattamie County Deputy Mark Burbridge on Tuesday of this week,” Ryan says. 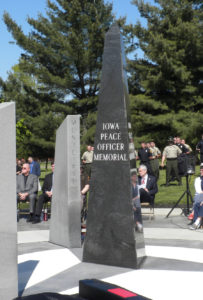 Ryan says the memorial near the public safety building is a fitting tribute to the fallen.

“We thank their families and their coworkers for their support and their sacrifice, because they also share in that sacrifice,” according to Ryan. Lieutenant Governor Kim Reynolds also spoke.

“Today’s ceremony is special because it allows us an opportunity to reflect upon our peace officers — both past and present — and to be mindful of the sacrifices that they make,” Reynolds says.

Reynolds says law officers are a key part of the every community in the state. “Our peace officers past and present proudly represent the good in our society,” Reynolds says, “their service in Iowa has been a long

and proud tradition. And today’s ceremony is another chapter in remembering those who have contributed to that tradition.”

Officers Martin, Beminio and Griffin were shot to death in the line of duty. Officer Miller died in a motorcycle accident while on duty. Reynolds says those sacrifices 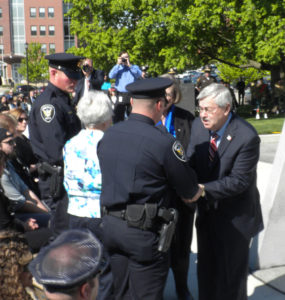 Governor Branstad presents a flag to the family of Officer Thomas Griffin.

were not in vain. “So it is with a heavy heart we reflect on the loss of such dedicated individuals. But we also know that their sacrifices were not in vain, and that their memory will be eternally remembered,” according to Reynolds.

Governor Terry Branstad also spoke and presented a flag to the families of the fallen officers. A new feature of the memorial now has the names of the officers who have fallen engraved in stone along the ring surrounding the memorial.

During the ceremony, the kids from the Young Patriots Club kids recite the poem “Too Young.” Audio: Poem :53.