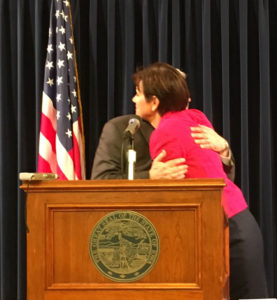 Governor Terry Branstad will resign at 10 a.m. tomorrow and a federal judge immediately will swear him in as the next U.S. Ambassador to China.

“I was confirmed by the United States Senate with 82 votes,” Branstad told reporters this morning. “I was very proud to receive a strong, bipartisan endorsement in a time of significant partisanship and difficulty in our nation’s capitol.”

Branstad and Lieutenant Governor Kim Reynolds briefed statehouse reporters this morning about tomorrow’s transition of power at the Iowa capitol (AUDIO is here).

Reynolds and Branstad hugged as Branstad gave up the microphone to her.

“I have no doubt that she will lead the state to bigger and better things in the future and I know nobody that’s ever been as well-prepared to take over the responsibilities as the chief executive of state,” Branstad said.

After their brief embrace, Reynolds began: “Well, I’m going to try to get through this without getting emotional, which is going to be a little bit of a challenge.” 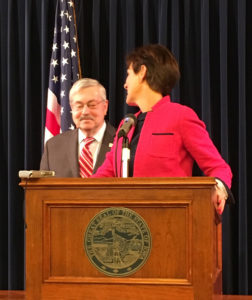 The Governor and Lt. Governor shared some light-hearted moments when talking about the transition.

“It’s difficult to even try to convey how much I appreciate the opportunity to work with you,” Reynolds said. “…I have had the opportunity learn from one of the best, the best governor in the nation.”

According to Reynolds, Branstad’s “competitive nature” has been contagious.

“Whether it was the 99 counties or Governor’s Steer Show or who could get to a groundbreaking or a ribbon cutting first — I did know who was always supposed to come in first,” Reynolds said, and Branstad laughed. “But that doesn’t mean I wasn’t challenged every day to get right there to the edge.”

Reynolds voice shook as she called Branstad the “right person at the right time” for the job of U.S. Ambassador to China.

“You continue to make us proud not only from your service and dedication and love for this state, but to continue to take that unselfish service and Iowa’s values to the world by being the ambassador to China is such a great testament to who you and Chris are,” Reynolds said. “…I just want to say personally: ‘Thank you for giving me the opportunity to serve with you.'”

Reynolds delivered an upbeat ending in her tribute to Branstad.

“We’ve had fun and we’ve worked hard and we’ve made a difference,” Reynolds said.

Reynolds will take the oath of office and become Iowa’s 43rd governor at about 10:30 tomorrow morning.