You are here: Home / Fires/Accidents/Disasters / More than 500 motorists have hit Iowa utility equipment so far this year 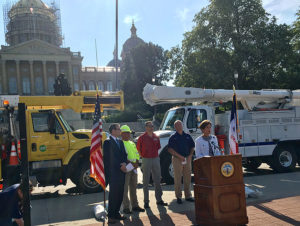 Governor Kim Reynolds urges Iowans to slow down or pull over when they see a utility vehicle on the roadways.

Governor Kim Reynolds has signed a proclamation urging Iowans to abide by a new state law that penalizes motorists who fail to slow down or pull into another lane when passing a utility maintainence vehicles.

“Utility workers already have very dangerous, high-risk jobs,” Reynolds said this morning, “so moving over and slowing down protects not only those utility workers, but also you and everyone else on the road.”

Corey Birkel, a lineworker for Alliant Energy, is based in Dubuque and he’s “more concerned” about passing drivers than the high-voltage lines he’s fixing.

“There are more distracted drivers out there on the roads today,” he said during a news conference in Des Moines. “Even when we put our bright orange cones out and turn on our flashing lights, they don’t always see us or change the way they drive.”

While there have been no fatal accidents involving motorists and utility crews, more than 500 pieces of MidAmerican utility equipment have been struck by a passing motorist so far this year. Jim Dougherty is MidAmerican’s vice president for electric delivery.

“The reason we collect that statistic and then communicate it to our employees is to raise awareness around the phenomenon of distracted driving,” Jim Dougherty, MidAmerican’s vice president for electric delivery, said. “Whatever the cause of that is, it’s a reality for our employees.”

“Our crews set up bright orange cones, signs and our bright yellow trucks with their flashing lights activated,” Dvorak said. “People still didn’t give them room to do their work.”

Motorists who fail to slow down or move over when passing a utility vehicle now — because of the new law — can be fined or, in extreme cases, can lose their drivers license. Since 2002, Iowa law has required motorists to keep a reasonable distance when passing emergency vehicles like police squad cars, fire trucks and ambulances.

(A previous version of this story indicated 500 MidAmerican utility vehicles had been hit this year. MidAmerican has clarified it’s 500 pieces of utility equipment, including utility poles.)