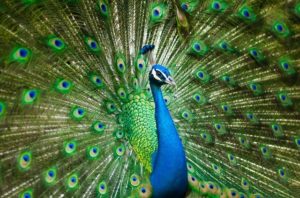 Turkeys aren’t the only birds of interest this Thanksgiving. A farm in western Iowa may be the solution to a peacock problem in southern Florida.

Miami area residents are frustrated by the wild birds making noise, leaving droppings, scratching cars and gobbling landscaping. Some resort to killing the birds and raiding nests to break eggs.

Dennis Fett, who runs a peacock farm near Minden, says he’d gladly take any and all of the problem peacocks ruffling feathers in Florida.

“We’ve offered our services. If they will take them, then we’ll be off and running,” Fett says. “I will adopt all of the baby peachicks that they have and put them on our farm here. If there’s too many, then we’ll find places that will adopt them off our website, peafowl.com.”

The adult peafowl can be adopted, too, and shipped anywhere in the U.S. economically, he says. Much like roosters, the colorful peacocks often crow — loudly — at sunrise, which can rub some folks the wrong way.

“Sometimes people had peacocks in the early days and then with urban sprawl, it causes problems and they encroach on humans’ backyards,” Fett says. “They cause problems with their noise and their excrement and that sort of thing. For some reason, some people really hate them and some people really love them.”

Peacocks can make excellent pets but Fett says they’re not for most city-dwellers.

“We always recommend against doing that if you don’t have a place like we do in the country or a place where the neighbors are not close,” Fett says. “Number one, the noise will be a problem. Number two, they wander and they like to eat things in your garden and that could be a problem if your neighbor has a prize tomato plant ready to be eaten.”

The Fett farm is now home to about 85 mature peacocks but he had more than 200 a few years back, prior to a damaging tornado that cut through the region. He’d like to build his peafowl population back up with the Florida birds.

“Oh my gosh, we have room for many more,” Fett says. “We would take everything they have. If someone wants to endow the project, we would even build new special holding places for these birds until they’re adopted out.”

Fett considers himself an expert on peafowl and he’s consulted on populations in New York, Hawaii and even at the late Hugh Hefner’s Playboy Mansion in Los Angeles. He’s written books on peafowl, composed songs and videos about them, and runs the Peacock Information Center.

Thanks to Karla James, Omaha