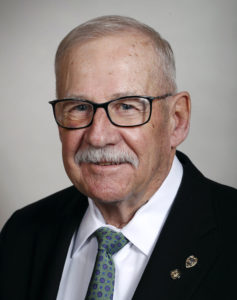 A bill that would allow the death penalty for those convicted of first degree murder in Iowa has been tabled in the Iowa House.

Representative Clel Baudler, a Republican from Greenfield, is chairman of the House Public Safety Committee and he said there isn’t enough support within the committee to pass the bill.

“I don’t have the votes,” Baulder told reporters today, “…although I think it’s a good bill.”

The measure’s dimming chances became apparent this morning when a key GOP lawmaker said he supports the death penalty as a moral option, but his research indicated it’s not a prudent option for the state given the expense of death penalty cases and the chance an innocent person could be sentenced to death.

Baudler said he doesn’t begrude anyone from holding firm views about the death penalty.

“It’s a tremendously emotional issue and I understand that,” Baudler said, “…but it is emotional on both sides of the issue, you know, whether you’re for it or against it.”

Baudler, a retired state trooper, is disappointed the bill cannot advance. A bill pending in the Iowa Senate would reinstate the death penalty, but for narrow instances like a kidnapping and then the murder of the victim. Baudler says if that bill clears the full Senate, House Republicans may reconsider the issue.

“He made his decisions and, in doing that, I think he should forfeit his life,” Baudler said, “but that’s just me.”

Baudler also cited the 2005 case of Jetseta Gage, a 10-year-old Cedar Rapids girl who was kidnapped, raped and murdered.

“That perp does not have the right to live,” Baudler told reporters today. “…Doesn’t have a right to breathe anymore. That’s my personal opinion.”

The Iowa legislature voted to ban capital punishment in 1965. In the mid-1990s, a bill to reinstate the death penalty narrowly passed the Iowa House, but was defeated in the Iowa Senate.