You are here: Home / Sports / Retiring officials going out on top 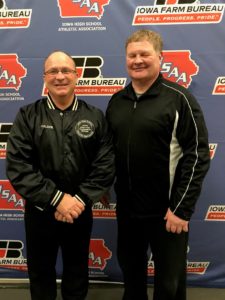 Dan Halder of Urbandale and Mike Denner of Waverly have combined to officiate 43 state high school wrestling tournaments. This week’s tournament will be their final one as both have decided to retire after Saturday night’s championship round.

It is a tournament both competed in as prep athletes. Halder wrestled at Pocahontas High School and Denner wrestled for New Hampton. It was a passion for the sport that led both to pick up a whistle.

“Back in the early 1980s I started officiating while in college”, said Halder. “It is something that grew on me and I have really enjoyed it the past 30 years.”

Denner admits he got into officiating for all of the wrong reasons.

“I was attending a meet my youngest brother was wrestling in and I was sitting up there being a typical fan and thinking the referee didn’t know what he was talking about and I could do a lot better”, said Denner. “So I studied and got my license and I found out very quickly that it isn’t as easy as it appears to be from the stands.”

Denner spent three years working junior varsity meets but as he gained experience athletic directors took notice and soon he was getting contracts to work varsity meets. This week’s state tournament is the 26th he has worked and the feeling never changes.

“I was still as nervous the night before the tournament as I was when I got my first state contract. It never changes”

This is the 17th time Halder has worked the state tournament and he views each one as an accomplishment.

“Because it is no guarantee each and every year to be at the state tournament”, added Halder. “You have got to have recommendations from coaches and athletic directors as well as the folks in Boone. This is my 17th consecutive year and I have refereed for 30 years so it will be nice on Saturday to go out on top.” 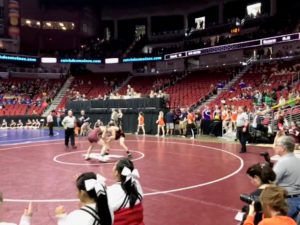 While Halder is hanging up his whistle he still wants to remain active in the officiating community. He is concerned about a shortage of young officials and would like to help recruit new ones.

“Hopefully there are mentor programs and I hope to help with that and recruit new officials and go out and evaluate them. Hopefully one day they will be at the state tournament as well.”

Denner says retirement will allow him to spend more time with his family. He has one grandchild and another on the way and one of his sons, Justin, coaches wrestling at Crestwood High School.

“I could not have done any of this without my family. They sacrificed more than what I have. All the miles and all the years they were right there with me. It’s time.”