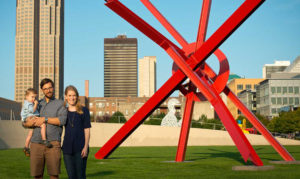 A new campaign uses residents to tout the benefits of living in the Des Moines Metro.

The Greater Des Moines Partnership launched a campaign Wednesday designed to take advantage of some of the good publicity the state has received recently in an effort to get more people to move here.

The executive vice president of talent development for the Partnership, Mary Bontrager, says the campaign invites people to move to Iowa and “Live Life Without Compromise.”

“It’s a national digital marketing campaign to really tell our story across the nation — both from a talent recruitment perspective and a business attraction perspective,” Bontrager says. A report from the U.S. Census Bureau shows it is the fastest growing metro area in the Midwest, and Bontrager says the campaign will include videos, blog posts and podcasts from residents who share the reasons they live there. Bontrager says the focus goes well beyond Des Moines itself.

“When I talk about Des Moines, I really talk about the greater Des Moines region, which is about an eight-county area here in the heart of the state,” Bontrager explains. “But certainly when we put a focus and a spotlight on the capitol city, that reflects back completely on the state of Iowa.” She says the campaign follows an 18-month research project completed in 2017. That research will allow them to target the campaign at the areas in the country where they think they may have the most success

“Our fastest growing age demographic here is 25 to 35 year olds — so that’s a lot of inmigration of that age demographic. So that is certainly a demographic that we will be targeting,” according to Bontrager. “And again, looking at the research and what the data tells us in what areas have we been successful in attracting new people into our community.” She says they will be able to track some of their efforts based on the online responses.

“We want to drive folks to our website where they can look at opportunities for careers that our here. If they get to the stage where they want to learn more, we’ll track how many relocation requests we receive or information as to relocating here,” Bontrager says. She says the campaign focuses on getting people to move to Iowa, with a complementary focus on business recruitment.