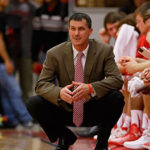 Central is 7-1 in the league tournament over the past three seasons and all seven wins have come on the road. The lone loss was at home in last year’s championship game to Wartburg.

“Our guys have a lot of confidence when it comes to this time of year”, said Central coach Craig Douma. “It is a testament to our players and how much they trust the system and they trust the coaches and trust each other. They know we are doing the right thing and it is just a matter of putting the pieces together.”

Getting a win at Nebraska Wesleyan will be the ultimate test. The Prairie Wolves are 23-3 and beat Central twice during the regular season on their way to a second straight regular season crown. The average margin of victory was 18 and-a-half points.

“We have to play really, really well to beat them”, added Douma. “Hopefully we can get them to play an average game and we can play a great game offensively. Then we will have a chance.”

They only have to look to last season as motivation. The fifth seeded Dutch lost both regular season games to Nebraska Wesleyan before beating the top seeded Prairie Wolves 85-63 in the semifinals of the IIAC Tournament.