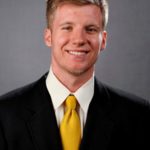 Ellingson played in 94 games for the Hawkeyes over parts of four seasons and averaged 3.3 points per game while shooting 40.4 percent from three-point range.

“Brady is another great addition to our program and we’re thrilled to have him join our team,” DeVries said. “He’s an experienced guard with a great feel for the game and the ability to shoot the ball.”

Ellingson is eligible to compete immediately for Drake after earning his degree in enterprise leadership and will have one year of eligibility remaining at Drake.

A 6-foot, 4-inch guard from Menomonee Falls, Wis., Ellingson appeared in 26 games last season and scored a season-high 16 points at Indiana. In 2016-17 he saw action in all 34 games and shot 47.1 percent from three-point range, a mark that stands as the second best by a sophomore in Iowa history. He scored in double figures five times on the season and made at least one three-pointer in 17 games.