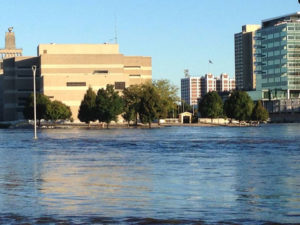 A decade after devastating floods, a Linn County official says the Cedar Rapids area still isn’t as prepared as it should be for future disasters.

In June of 2008, the Cedar River flooded cities across eastern Iowa, including Cedar Rapids, which was 14-percent underwater. For years, local officials have lobbied for federal funding for flood control projects, but Linn County Supervisor John Harris says it may be time to ask local taxpayers for the money through a ballot referendum.

“It’s important to get these flood walls up as soon as we can,” Harris says, “and then we pray that it never happens again.” For now, the plan to build the seven-mile system of walls, pumps and levees along the Cedar Rapids riverfront is — just a plan.