You are here: Home / Sports / Former Iowa All American to bid for first outdoor title at USA Track and Field Championships 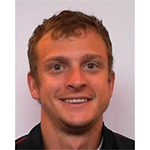 A former Iowa All-American will be one of the favorites in the 800 meter run at the U-S Track and Field Championships. Erik Sowinski burst onto the international scene in 2013. The five time All American for the Hawkeyes was a late addition to the 600 meter run at the Millrose Games in New York. He not only pulled off a shocking win but he set an American record in the process.

Three weeks later he won the 800 meter title at the U-S Indoor Championships.

“It was definitely a good year and it opened a lot of doors,” said Sowinski. “It proved to me that I could compete with anyone on this circuit and I have kept that mentality going forward.”

Sowinski duplicated his 800 indoor championship in 2014 and a win in Des Moines next week would be his first outdoor title.

“It would be huge”, added Sowinski. “I have been second. I have been third and I have been fourth but I have not been able to win that outdoor title. To do it at Drake would be extra special because I will have a lot of family and friends in the stands.”

Sowinski may be peaking at the right time. He is coming off a win in Germany in his last race and prior to that ran a season best at a meet in the Netherlands.