You are here: Home / Agriculture / Pork plants use new tech to cut down on hog odors 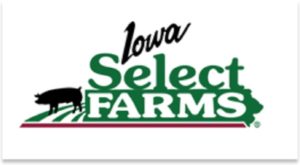 The largest pork producer in Iowa is announcing a new commitment to odor reduction and farm beautification.

John Stinn, the environment project manager for Iowa Falls-based Iowa Select Farms, says to cut down on the smell, they’ll be putting up what’s called an electrostatic precipitator fence on all new company-owned farms.

“Basically how that works is, we string a couple of high-voltage wires right after the fans on the end of the barn so as the dust particles leave the barn, they’ll be charged by that fence and they’ll impact our green screen fence that will grab onto those charged particles and prevent them from leaving the farm,” Stinn says. “By reducing the dust that leaves the farm, we also reduce the odor.”

On the beautification side of the effort, the company plans to plant tree wind breaks. Stinn says the dual effort will involve all of the new Iowa Select Farm facilities that are under construction.

“All the farms that we are building this summer, we are committed to putting both tree wind breaks and also this electrostatic fence on them as well,” he says.

The first of the new facilities was recently dedicated near Williams in Hamilton County at the Hale Finisher site.