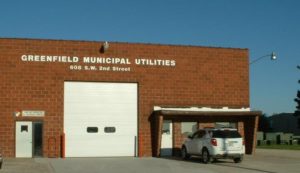 Residents of the southwest Iowa town of Greenfield have been without clean drinking water this week because of a blue-green algae bloom. Scott Tonderum, general manager of Greenfield Municipal Utilities, says it’s a first for the city.

The algae infested the lake that feeds the town’s water supply. “This is the first time we’ve had one that’s really been noticeable,” Tonderum says. “I mean, we may have had real small blooms in the past but nothing to this extreme.”

It’s unclear what caused the problem, first discovered Monday afternoon. “We think it may be attributable to some weeds that had died in there and the algae is eating off the weeds, but we do not know exactly for sure,” Tonderum says.

Residents of the Adair County town are under a bottled water advisory, meaning only bottled water should be used for drinking, infant feeding, making ice, brushing teeth, washing dishes, and preparing food. Tonderum says boiling the tap water will only concentrate the algae more, but the water is safe for showering, washing hands, and laundry.

Test results returned this morning show the city’s water is within what’s considered a safe toxin level, but the advisory remains in place. “Now, really the issue we’re dealing with is just the higher turbidity (cloudiness) in our water and we’re in the process of trying to get our storage facilities drained and our system flushed out,” Tonderum says.

Hy-Vee, Casey’s, and Fareway stores have all offered free bottled water to Greenfield residents. Tonderum hopes tap water will be safe for drinking again soon. “We’re shooting for before the weekend and I’m hopeful that maybe we can hit that goal tomorrow (Thursday),” Tonderum said.