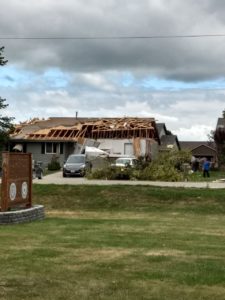 A house in Bondurant that was heavily damaged in Thursday’s storms.

It’s still not known exactly how many tornadoes touched down in Iowa on Thursday afternoon, though some media outlets are reporting up to 27.

Jeff Johnson, the meteorologist-in-charge at the National Weather Service office in metro Des Moines, says there were five confirmed tornadoes and likely more than ten, but 27 is probably way too high.

“We know there were significant tornadoes in Bondurant, near Pella, Marshalltown and near Ottumwa,” Johnson says. “We do have two survey teams out examining the more significant tornado damage. With that said, we had several reports of weak tornadoes across parts of north-central Iowa earlier in the day. There may’ve been a few touchdowns up there so it’s going to take a while to sort this all out.”

One of those survey teams will be documenting the damage in Polk, Jasper and Marion counties, while a second team will focus only on Marshall County, where the town of Marshalltown had perhaps the worst of the day’s storm damage. Johnson says they’ll also be studying images from space.

“It’s interesting how we do this. We’ve ordered high-resolution satellite data that will be given to us so we can examine the before-and-after effects of some of the areas impacted so we can figure out where these tracks exactly were,” Johnson says. “We’ll also work with our Emergency Management partners to determine the exact numbers.”

The conflicting tornado numbers being reported are likely coming from people confusing the number of reports with the actual numbers of twisters, as he says multiple spotters reported seeing the same tornado.

“Five, definitely, and I think we had over ten, I just don’t know how many exactly,” Johnson says. “Most of them were minor. They occurred in open fields and didn’t cause damage, but unfortunately, we did have some more significant tornadoes which impacted built-up areas.”

Just two weeks ago, a Radio Iowa report detailed how only 15 tornadoes had been reported statewide so far this year, which is well below the usual 30 to 35. A total of 15 was considered very low for the state’s twister count.

“Depending on what the final count is, yeah, we’re going to probably nearly double that number, if not more,” he says.

Last year, Iowa recorded 55 tornadoes statewide. While the peak months for tornado season in Iowa are April, May and June, Johnson warns twisters can strike during any month of the year.