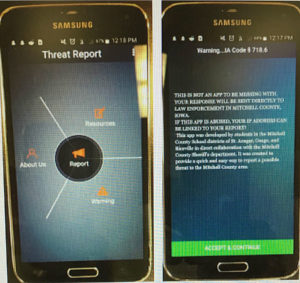 A group of high school students in a northeast Iowa county have developed a new “app” to manage tips about threats to school safety in the area.

Seven students from Osage, Saint Ansgar and Riceville worked with the Mitchell County Sheriff’s office to design and publish the app. “Messages can get miscommunicated,” says Jenna Plotzke, a senior at Osage. “And we have problems where you think there’s a kid with a gun or anything like that, so we wanted an easier way to communicate and a more efficient way to communicate if there was a threat and let administration know.”

“Go back and look at the history of active shooters in our schools and school violence — so many of our young people say, ‘Well, we knew he was going to do it or she was going to do it,’ but they don’t pick up 911 and call,” he says. “We find out afterwards and it’s too late. If we can get these young people to report confidentially, through an app, what better way to get the information ahead of time.”

The app is available at the Google Play Store right now. The app asks six general questions, from what the threat is to who’s involved and where it could happen. Plotzke says she and the six other students who worked on the app hope it can be used elsewhere.

“I think it would be really beneficial if we’d be able to get it to other counties in Iowa or even nationwide, if other people could use our interface to then create an app that can then help their county,” she says. “I know Mitchell County is pretty small and if you had a bigger county, how much more beneficial it could be and how many more reports they could have and help diffuse situations before they get out of hand.”

The Mitchell County Threat Reporter app will be released for the iPhone and other Apple devices later this week.