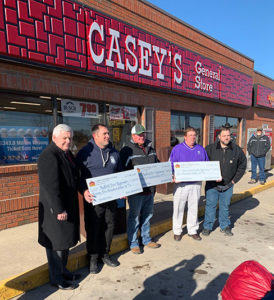 An Iowa-based convenience store chain is donating a $10,000 bonus from the Iowa Lottery to emergency responders and a school that serve the small Dallas County town of Redfield.

The Casey’s store in Redfield received the $10,000 check for selling an October 27th jackpot-winning Powerball ticket. Casey’s is giving $5,000 to West Central Valley High School, where Rusty Shockley is principal.

“We’re working on a branding project for West Central Valley and we’re going to use (the money) for some graphics types-of-things to really dress-up our new high school — it’s about seven years old — just to make it a better environment for the entire student body,” Shockley said. The remainder of the lottery bonus will be split between the Redfield Volunteer Fire Department and the Redfield First Responders ($2,500 each). Mike Short is chief of the Redfield Fire Department.

“We’ll most likely use it to purchase some gear or something to keep us updated with ever-advancing things in the industry,” Short said. Obie Meyers is with the Redfield EMS Association.

“We’ll use this money to increase our medical response capabilities and also to update some of our equipment,” Meyers said. Around 800 people live in the town of Redfield, which is located about 37 miles west of Des Moines.

Last week, 51-year-old Lerynee West claimed the largest lottery prize ever won in the state of Iowa. West, who grew up in Earlham and recently purchased a house in Redfield, bought the winning ticket at the Casey’s in Redfield and chose to take a lump sum payment of $198.1 million.