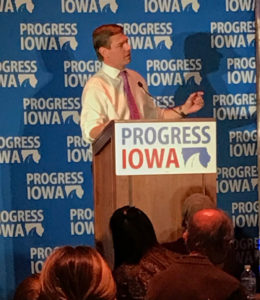 “Go big on the issues we solve, be bold in the solutions we offer and always do good for our country,” Swalwell said, followed quickly by a summation: “Go big. Be Bold. Do Good.”

Oregon Senator Jeff Merkley said America can afford “Medicare for All” and take steps to get all its energy from “clean, renewable” sources.

“Let’s elect folks who understand that our planet is at risk,” Merkley said. “…Make the Earth cool again.”

Andrew Yang, a New York businessman, is the only one of the four who is an officially declared candidate for president, with paid staff already working in Iowa.

“There is only way for us to build a trickle-up economy — from our people, our families and our communities up,” Yang said, “and it all starts with you, the Democrats and progressives of Iowa.”

Tonight’s event was an annual holiday party organized by “Progress Iowa” and the group kicked things off with speeches from the two Democrats who will be the first women to representing Iowa in congress. Cindy Axne of West Des Moines, the congresswoman-elect in Iowa’s third district, mentioned the looming fight over the Affordable Care Act.

“I will do everything I can to make sure that we never go back to the time when people with pre-existing conditions are denied coverage or have to pay more,” she said, to applause.

Abby Finkenauer of Dubuque, the congresswoman-elect in Iowa’s first district, used the end of her brief speech to focus on the next election.

Finkenauer and Axne will be sworn into office on January 3, 2019. The Iowa Caucuses are scheduled for February 2, 2020.