You are here: Home / News / More snow and ice predicted for Tuesday 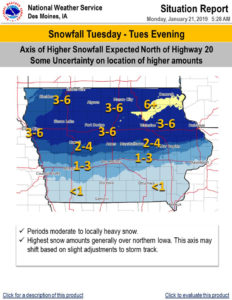 A Winter Weather Advisory covers the state’s western and central counties while a Winter Storm Watch is up for northeast Iowa. Meteorologist Roger Vachalek, at the National Weather Service, says the system will start to arrive late tonight.

“Initially, we may end up getting some light freezing precipitation, either some light snow or maybe some light freezing rain as it crosses parts of northern Iowa,” Vachalek says. “Then, it’ll change over to all snow on Tuesday for most of the day and the evening hours.” Snowfall is expected to be the deepest across north-central and northeast Iowa, with 3-to-5 inches likely, while some areas could see as much as seven inches. The winter storm has the potential to make driving almost anywhere in Iowa more dangerous.

“It looks like it’s going to impact both the morning and afternoon commutes,” Vachalek says. “Folks traveling tomorrow especially, need to be aware we could have some hazardous conditions throughout much of the day. It’ll begin late tonight and it’ll probably be ongoing by the time you wake up.” We’ll get about a day to recover before another winter blast may wash over Iowa.

“We have coming up later in the week, another chance for some snow as an Arctic front pulls south,” Vachalek says, “and probably the coldest weather we’ve seen so far coming in for late Thursday and Friday and on-and-off into the weekend.” Low air temps by Thursday night — not including wind chill — may dip into the teens below zero.