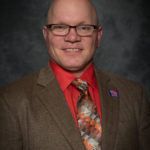 Officials with the Iowa High School Athletic Association are looking at ways to strengthen dual team wrestling, including the possibility of moving the state dual team tournament.

The dual team tournament was moved to the day before the start of the traditional tournament in 2012. The move drew the ire of numerous coaches who did not want their individual qualifiers taking part.

Lewie Curtis is the wrestling administrator for the IHSAA.Curtis says their ultimate goal is the strengthen dual competition in the regular and post season.

“Everybody wants to be in the individual tournament and they work so hard all year long to make it here”, said Curtis. “We want the coaches and kids to be all in with the duals as well.”

Curtis says any change is a couple of years away. The association’s contract with Wells Fargo Arena currently includes four-days of competition.