You are here: Home / Agriculture / Hamburg area farmer says recovering from this flood may not be possible 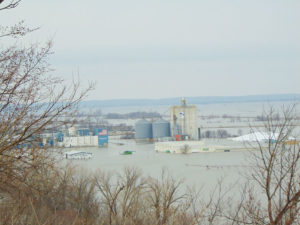 Michael Stenzel of Hamburg was on hand to listen as the land he farms with his dad remains flooded. “As of right now, we’ve probably got a hundred acres out of the three-thousand that is not covered by water,” Stenzel says. He says their closest ground to the river is a quarter of a mile away, but they see issues because the Corps water releases put the river at such a high level. Stenzel  says when the river runs at a high level, they constantly fight seepage into the nearby farmland.

Stenzel is the president of McKissick Island Dike & Levee, and drainage district, where he says they went through about $45,000 in fuel last year for pumps to try and keep the 5,000 acres dry. Stenzel says the way the river is managed with the various wing dams slows it down too much.
“I feel that the river needs to be sped up,” Stenzel says. “When a river runs fast and hard — you’ll see the scouring in the bottom of the river — so therefore the channel will be a little bit deeper. We’ll be able to hold a few more gallons coming through.”

Stenzel says another thing that added to the problem was the lack of communication from the Corps. “In 2011, they came to us two weeks before and told us, ‘Hey this is what the dam’s going to do, this is how much water is going to come,’ so we had some time to prepare. This time they didn’t do it,” according to Stenzel. “My father and I, our operation, we lost 50,000 bushels of beans and a 140,000 bushels of corn, and probably 11 grain bins.”

While the Senate hearing was designed to try and move things ahead and make changes to prevent future flooding — Stenzel says its slow-moving nature is frustrating to farmers. “The political process is not what farmers want to hear. Farmers are the type of person who will get out, they will do whatever they need to do to get the job done,” Stenzel says. “That’s why farmers are not politicians.”

Stenzel says he was just starting to see his operation get back to where it should be following the flooding in 2011, and now that was all washed away again. “We’re going to be in such a hard deep hole — we might not ever get out,” Stenzel says. Iowa Senator Joni Ernst called for the field hearing by the Senate Environment and Public Works Committee, and was on hand with Senator Chuck Grassley and other officials.