You are here: Home / News / Tulips blooming as Pella prepares for annual festival 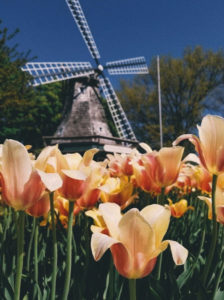 The start of Pella’s annual tulip festival is still more than a week away and thanks to warm spring weather, about two-thirds of the southeast Iowa community’s famous flowers are already in bloom.

Jeanette Vaughan, community services director for the City of Pella, says they’re putting the word out in hopes some people might make an early “tulip trek.” “We do have some folks who are more interested in the tulips than a festival atmosphere,” Vaughan says, “so we do like to let them know when tulips are blooming if that’s their primary purpose for a visit.”

Pella plants between a quarter-million and 300,000 tulip bulbs in some 180 beds every year and Vaughan estimates 60-70 percent of them are now in full bloom.  “It’s going to be perfect for Tulip Time this year,” Vaughan says. “Once our tulips start to bloom, if weather conditions are right, the blooms will stay good anywhere from one to three weeks, so, even our tulips that are blooming right now, many of them will still be around for Tulip Time.”

Pella celebrates its Dutch heritage May 2nd through 4th. The 84th annual Tulip Time Festival will feature two parades daily, food, costumes, dancing, displays, demonstrations and tours. The festival typically draws 175,000 visitors over its three-day run. Later in May, once the hundreds of thousands of tulips have run their course, Round Two of the color show will begin.

There will be a free tulip dig day announced later in May where anyone is welcome to dig up bulbs from the city beds, under specific guidelines, for their own gardens. Some bulbs produce flowers three or four years in a row while others will continue to bloom for much longer.