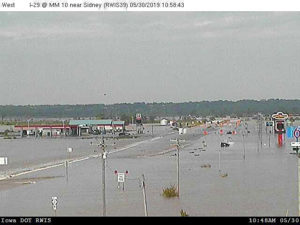 DOT traffic camera view near Sidney on I-29.

“It is not a rescue operation,” he says. “It’s just a support function.”

The unit was activated by Iowa Homeland Security. The National Weather Service warns flooding will continue in southwest Iowa along the Missouri River for several more weeks.