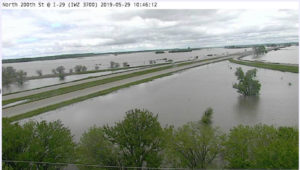 A local foundation has awarded $200,000 in grants to assist with immediate needs of flood victims in southwest Iowa and eastern Nebraska.

The Iowa West Foundation made the award as part of $7.7 million dollars in grants and initiative funding that was awarded in their current cycle. Foundation CEO Pete Tulipana says Iowa West partnered with other groups to get funding to flood victims.

“We actually worked with some of our sister and brother foundations on the Omaha side and asked them to join us in providing funding for emergency relief in southwest Iowa,” Tulipana says. “A total of $565,000 was actually funded by four foundations.” The foundation is the nonprofit license holder which receives the state mandated fees from the Council Bluffs casinos and is also funded by investment income.

The grant money was divided among the various organizations working on flood relief in southwest Iowa. “Like Food Bank of the Heartland, Iowa Legal Aid, Harrison County Foundation, Mills County Flood Fund and Fremont County Flood Fund, in addition to traditional organizations like the Red Cross and Salvation Army, who are reaching out in those communities,” Tulipana says.

By awarding the money to organizations that already have presence in flood-affected areas, Tulipana says the partnering foundations can meet their goal of having an immediate impact on recovery efforts. “Make sure that there was emergency funding available immediately for all those who were impacted by the flood, and that those funds were available and distributed by organizations who had boots on the ground in communities that were the hardest hit,” according to Tulipana.

Tulipana says the Iowa West Foundation will also look towards more long-term assistance for flood victims.
“Our plan is to take a second look at this and look at the longer-term needs once the floodwaters have receded and we see what the situation is,” Tulipana explains. “We realize this is a devastating event to many, many families, and we want to be a part of helping to find the solution.”

A full list of grant awards from the foundation can be found at iowawestfoundation.org.