You are here: Home / Health / Medicine / Sanders says Democrats ‘win big’ in 2020 with Medicare for All 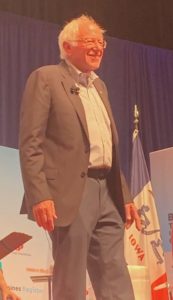 Vermont Senator Bernie Sanders is defending his “Medicare for All” plan as some competitors for the Democratic Party’s 2020 presidential nomination warn embracing the proposal could doom the party’s prospects next year.

“Those candidate who run on that program, who have the guts to take on the drug companies and the insurance companies will win and win big,” Sanders said this afternoon.

Sanders was the first of three candidates to speak Saturday at a forum in Council Bluffs sponsored by AARP and The Des Moines Register. Sanders repeated his accusation against former Vice President Joe Biden, that Biden has been “distorting” the tenants of the “Medicare for All” plan Sanders has authored.

“Joe talked about a hiatus, in other words if you have a serious illness as we transition to ‘Medicare for All’ there may be a hiatus. That is absolutely wrong,” Sanders said. “Of course there will be a continuity of care.”

South Bend, Indiana Mayor Pete Buttigieg supports letting Americans buy into the Medicare system — a so-called “public option.” Buttigieg calls it “Medicare for all who want it” and argues will be cheaper than private insurance.

“It’s also one last dare, though, to the corporate world to come up with something better than they have. If they do, great. I’m not counting on it,” Buttigieg said, “and so I think what will happen over time is that this will become a very natural glide path toward a ‘Medicare for All’ environment — not by flipping a switch and banishing the private sector, but just by putting something better on the table and letting people figure it out for themselves.”

Montana Governor Steve Bullock — the other candidate who addressed AARP members this afternoon — said forcing millions of Americans to give up their private insurance isn’t the answer.

“So many of them like it,” Bullock said. “Sometimes you don’t like either the cost or the deductibles. We can work on that without disrupting the entire system.”

Bullock supports adding a “public option” to Medicare, letting Americans under the age of 65 buy into the system.

“I don’t recommend smoking anything, but not only are there important medical uses, but we’ve just hit at the point as a country where there are a lot of offenses, including I think non-violent drug offenses, where the way we responded to it — the incarceration — is actually doing more harm to society,” Buttigieg said.

Bullock, as the governor of Montana, recently approved tweaks to his state’s medical marijuana program.

“It goes to individuals in need and it makes a meaningful difference, but you always have the barriers at the federal level, both the scheduling of it as a drug and the difficulty of banking any of the dollars, being medical or recreational,” Bullock said, “so I think the federal government should get out of the way and this is a state-by-state decision.”

Sanders, the first candidate to speak today in Council Bluffs, has long supported legalization of marijuana, as part of his criminal justice reform agenda.