You are here: Home / News / You can frame yourself at important landmarks in Mason City 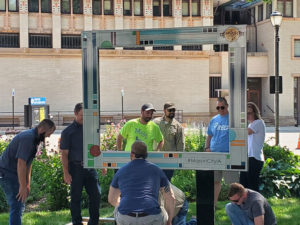 Large frames are appearing at prominent spots in Mason City so visitors can snap photos with important landmarks and promote the community on social media.

Donnie Miller, part of this year’s Leadership North Iowa class, says the frame in Central Park allows people to capture the Historic Park Inn Hotel when facing one direction, while the East Park frame is also a desirable location for photos.

“We wanted to make sure it had some sort of a site on both sides, so the one’s got the ‘Heart Rock,’ a beautiful backdrop, and the other side’s got the playground in the background with the swing set and everything,” Miller says. “So, if your kids are playing back there, you can kind of get the backdrop of the Mason City sign and all that, really nice.”

Lindsey James, with Visit Mason City, says the process of “place making” by using social media is a growing trend.  “The frames were an idea that rose to the top and that was overwhelmingly approved by the board, they gave great support for it,” James says. “Then it was perfect timing because the Leadership North Iowa class was looking for a community project and we were just so excited for the opportunity to team up and collaborate to bring this to fruition.”

James says people will take pictures with the frames as part of the “Frame Mason City” project, with the hopes others will notice the Visit Mason City logo and hashtag #MasonCityIA to draw interest to the community. “It’s something that compliments what we’re already seeing with the sculptures and the murals,” James says. “It’s something that visitors are going to notice when they’re in town, snap pictures and hopefully be sharing them on social media, and then that gives us something that we can also share and use in our publications and on our website and our social channels, and just more promotion for the community.”

Besides frames in Central and East parks, James says Visit Mason City has secured funding for three more frames to be placed in locations to be determined.