You are here: Home / Agriculture / Crops need some warm weather to mature before frost 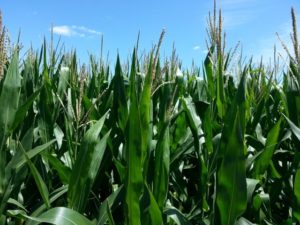 The air conditioners are off and the windows are open as we’ve been enjoying mild temperatures in the last several weeks.

Iowa State University extension crop specialist, Joel DeJong says things are great for people — but the crops need some more heat to get things growing. “If you go back to the first of May we were 133 growing-degree days behind. In the middle of summer on the best scenarios we are going to add about 25 a day,” according to DeJong. “So under the best scenario you’d say we were probably five to six days behind. If you take a look at average temperatures this time of year — we had a high of 75 and a low of 55 — we’d accumulate 15 per day. So, we’d be closer to ten days behind normal with that.”

But the overall progress of the beans has them nowhere near getting ready to turn color. “We’ve still got quite a ways to go on the soybeans, because some years that last week of August you can start to see some of those early varieties start to turn. And I don’t think we are close to seeing any of that in this stage of the game yet,” he says.

DeJong says the forecast for cooler than normal temperatures won’t help. “That’s not what we want we want to be at average and maybe slightly above average as we enter the month of September,” DeJong says. DeJong says in his northwest Iowa area the corn needs more heat to get it to mature before the first hard freeze ends the growing season.

“Corn will be okay with adequate water all the way up to 86 degrees high. We’d like to have some of that to kind of get it along and to speed the process — but we don’t see that in the cards,” DeJong says. “Normal frost date is about the 10th of October here. A lot of this corn is not going to be mature until we get to the first of October,” DeJong says.

He says corn in other areas will really have a tough time beating the frost. “Near the Minnesota border, all that June-planted corn right now, a lot of that corn is still in the milk stage. Milk stage tells me it’s going to be well into October before it hits maturity — especially with the forecast,” DeJong says. DeJong says he expects to see mediocre yields in northwest Iowa for both corn and soybeans.