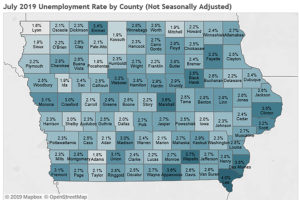 Area Development Corporation director Tim Fox says the numbers from Iowa Workforce Development are troubling. “Our unemployment rate is now the third-highest in Iowa,” Fox says. “Clinton is at 4%, Wapello is at 4%, we’re at 3.9% and that was up from 2.8% the previous month. Of those people discharged from Simply Essentials, presumably 100 of them filed for unemployment.”

The company is owned by California-based Pittman Family Farms, which closed the plant in August, eliminating 513 jobs. Fox says they’re looking for potential buyers and the search has moved overseas.  “We’re looking for high-margin commodities to come out of this plant,” Fox says. “We cannot have market-rate poultry because the site isn’t big enough and it lacks economies of scale. We’re trying to target niche markets, especially in Asia.”

Other places like Mexico and Europe are suitable candidates for organic chicken production. According to Fox, the facility could be sold by the end of the year, but he says the willingness of the owners is a sticking point. “There needs to be a commitment to spend some marketing dollars on behalf of the owner,” Fox says. “That’s really where we’re at and it’s not an incredible amount of money to do a decent marketing blitz.”

Fox says several factors are contributing to a slow resurgence of interest in the plant.  “One of the misconceptions of this Simply Essentials plant is that they weren’t paying very well,” Fox says. “Actually, they were paying in a range that would equate to nearly 100% of the average county wage for Floyd County.” He says 80% of the workers at the plant worked more than 40 hours a week.