You are here: Home / News / Denison teacher placed on leave over use of ‘n’ word in class 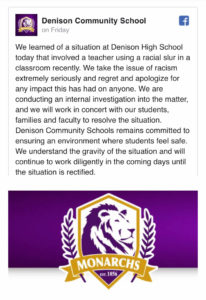 A Denison High School teacher has been placed on administrative leave after students complained the teacher used the “n” word in the classroom.

Crystal Holt said she had divided students into juries, to discuss a court case involving the death penalty, and they were making poster boards about the case.

Holt said there appeared to be no issue that day with the discussion, but the next day the dean of students asked her to speak with another class that had taken issue with her decision to use that word.

“I went to that other teacher’s class and tried to explain the context of how I was using the word, the explanation of my teaching,” Holt told KDSN. “And I believe there is a videotape that is circulating (online) of me and the other teacher’s voice talking in that class trying to explain how we were using that word in instruction.”

A group of students are planning a protest tomorrow morning to call for Holt’s firing. The school’s superintendent posted a statement on Facebook Friday, saying the district is conducting an internal investigation. The statement did not name the teacher involved.

Holt said her use of the word was not a racial slur.

Holt spoke with a reporter at Denison’s radio station and was asked if the use of that word outside of an academic setting would be appropriate.

“Never, never,” Holt replied. “I cannot imagine that being used except in a classroom to combat and explain issues of racism.”

Holt’s husband is State Representative Steven Holt, a Republican who in 2018 tabled a bill in the legislature that would have reinstated the death penalty in Iowa.

Denison’s superintendent, in the statement posted on Facebook, said the district takes the issue of racism “extremely seriously and regret and apologize for any impact” this classroom incident may have had. The superintendent said he’d work with students, their families and the school’s faculty to resolve the situation.