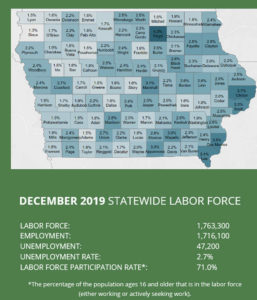 That state unemployment rate went up slightly in December.

The December rate was 2.7% — up slightly from the 2.6% in November.  Iowa Workforce Development reports nonfarm employment lost 3,100 jobs in December — the second consecutive month of losses.

The workforce did grow by 4,400 — but overall the number of unemployed was up by 1,000 from November to December. The

Iowa rate is still below the national jobless rate, which stayed at three-point-five percent in December.