You are here: Home / News / New type of stink bug is invading Iowa from China

The coronavirus isn’t the only thing from China that’s invading America this winter.

An insect expert says people across Iowa and the Midwest are reporting they’re finding droves of half-inch-long stink bugs in their houses. Creighton University Biology Professor Ted Burk says it’s a species of creature we haven’t seen in the U.S. before and the critters are plentiful.

“What we’ve been seeing this year, more than we’ve ever seen before, is this new invasive species, the brown marmorated stink bug,” Burk says. “This is the first year we’ve really had lots of widespread comments about them getting into people’s houses.” The bugs don’t really do much but hide in cracks and crevices. They don’t bite but — like a skunk — they do emit a foul smell if disturbed.

Burk says this is just the latest of several invasive species of insects that have found their way to Iowa in recent years.
“We’ve got the Asian long-horned beetle, we’ve got the emerald ash borer, we have the Asian multicolored ladybugs that have been invading people’s houses so much in the past few years,” Burk says. “It’s really just a reflection of the fact there’s so much worldwide trade originating in China now that things are being spread all over the world.” 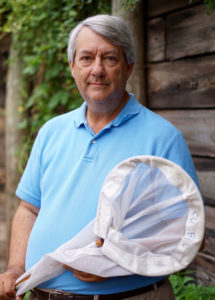 Because of their odor, some people like to avoid trying to swat or capture the stink bugs, however, Burk says they’re resistant to most chemical insecticides. “You can buy little insect vacuums to vacuum them up in your house,” Burk says. “If you go to Amazon, there’s about ten different varieties of insect vacuums which seem to be developed mainly for stink bugs. There’s even one called the ‘Bugzooka’ for collecting them.”

Stink bugs are attracted to water and warmth, which we can use to our advantage. “You just get a tinfoil roasting pan or something like that, put an inch or so of soapy water in it and then take a desk lamp and shine it on the pan,” Burk says. “The light will attract the stink bugs and they’ll drown in the soapy water.”

He also suggests you focus on the future and work to caulk or seal any cracks and all entrances to avoid an infestation next fall. There -could- be a threat to agriculture, as Burk says the brown marmorated stink bug feeds on more than 300 different kinds of fruit and vegetable plants.