You are here: Home / News / Hornick Mayor says lots of work remains one year after flooding 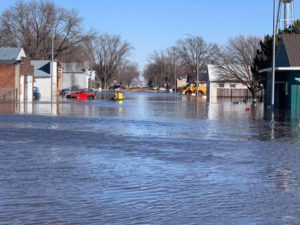 It’s been a year since everyone in the small, northwest Iowa town of Hornick had to evacuate because of flooding.

Hornick Mayor Scott Mitchell says there’s been progress, but they still have a long way to go.

“Recovery-wise, I always thought we would recover quickly, but I’m going to say it’s probably two to four years until we’re fully recovered,” he says. “A lot of people are still working at repairing their basements and, as they have the money, they buy what they need to fix it.”

Hornick is about 25 miles southeast of Sioux City and had about 220 residents when last year’s flooding hit. Hornick was awarded more than $2 million last year to build a protective barrier called a berm around the city, to prevent future flooding. Mitchell says the town is still waiting to start the project.

“When we were designing the berm, we decided to reuse the dirt that was going to be coming out from underneath the roads for part of the dirt for the berm,” Mitchell says.

The community is waiting for funding from FEMA for the road repairs.