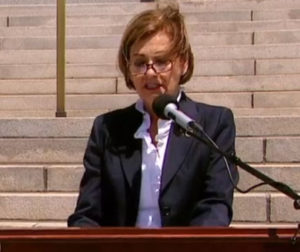 Governor Kim Reynolds says the peaceful protests in Iowa this weekend had a powerful message, but she’s condemning the few who resorted to rioting.

Reynolds said the curfew in Iowa’s Capital City seems to have worked to diffuse violence. She supports continuing the curfews in Polk County, Scott County and Council Bluffs as law enforcement figures out who may be instigating riots here.

“You don’t come to a peaceful protest with bricks and hammers in your backpack,” Reynolds said this afternoon during a news conference on the statehouse steps, “and so until we get figured out who’s doing that, get it identified and really do every we can to give Iowans the opportunity to peacefully protest, that’s our goal.”

Windows were broken during rioting in downtown Des Moines on Friday night and things escalated 24 hours later, as 90 percent of the businesses in the Court Avenue Entertainment District in Des Moines suffered property damage and a grocery store was looted. Reynolds said she, along with key Polk County leaders met to discuss their options for a couple of hours before issuing the overnight curfew on Sunday.

“It wasn’t something that we came to the table wanting to do,” Reynolds said. “It was something we felt that was necessary to control the violence and the looting that we heard was about to take place across this state and that is unacceptable.”

The executive director of the American Civil Liberties Union of Iowa argues a county-wide, stay-at-home order is far broader than necessary and gives police too much discretion in enforcing the curfew.

Davenport’s curfew was announced early this morning after two people were shot to death and a police officer was wounded in overnight rioting. Davenport’s mayor has asked for Iowa National Guard troops. An aide to the governor says Iowa National Guard troops have not been assigned, but could be deployed within hours in Davenport, where the Guard has an armory. Normal deployments require 72 hours notice, but hundreds of Guard soldiers are already on active duty due to the pandemic.