You are here: Home / News / GOP lawmakers say Iowa Capitol will not become ‘an area of lawlessness’ 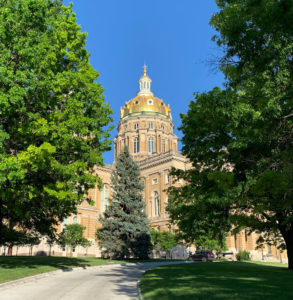 The top two Republicans in the legislature are condemning the actions of protesters after 17 Black Lives Matter activists were arrested yesterday  on the Iowa Capitol grounds. The protesters say the police involved should be investigated.

In a written statement, House Speaker Pat Grassley and Senate Majority Leader Jack Whitver say “assaulting, disarming, and spitting on law enforcement is never acceptable” and will not be tolerated by any group on the Capitol grounds. The two lawmakers say they strongly support law enforcement’s actions to end what Grassley and Whitver described as “a violent confrontation with a disorderly group of protesters.”

The Republican legislative leaders say any member of the public should feel welcome in the Iowa Capitol and “it is not, nor will it become, an area of lawlessness.”

Des Moines Black Lives Matter protesters have issued a written statement, saying they tried to “de-arrest” fellow activists being detained by police by pulling their peers away from officers. The group accuses the police of becoming “violent and unmanageable” at that point and injuring some of the people who were arrested.