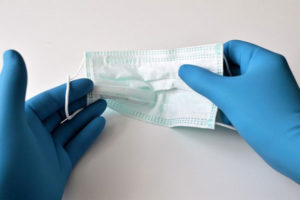 The Dubuque City Council and the Johnson County Board of Supervisors have voted to mandate the use of face coverings in public spaces, while the governor continues to say city and county officials lack the authority to enforce mask mandates.

Earlier this week, the Dubuque chamber of commerce called for local control on this issue after the White House Coronavirus Task Force Dubuque County a Covid red zone. Dubuque Police Chief Mark Dalsing said regardless of their personal views, officers will enforce the measure, with a focus on education.

“I think for the most part we’re probably going to see compliance. Maybe they go around the corner and stop complying, but we can do what we can do,” he said. “There is a possibility that somebody is going to try to make a political stand and force the issue and we’ll see where that goes.”

Dubuque City Council members say they’re very worried about a resurgence as schools reopen and are deeply troubled by the county’s death toll of 31 people. The masking requirement will go into effect Saturday.

The Johnson County Board of Supervisors has voted to mandate the use of face coverings in public spaces, while the governor continues to say city and county officials lack the authority to enforce mask mandates.

“It wasn’t something that people wanted, but once you started doing it, it was effective,” Porter said. “So I just want to say that I’m doing this to save lives.”

Johnson County Supervisors say their mandate will go into effect once it’s published in the local paper, which is expected to happen on Monday. Governor Reynolds isn’t threatening retaliation, but she said Thursday that a “one-size-fits-all mandate” from a city or county government is not the right move.