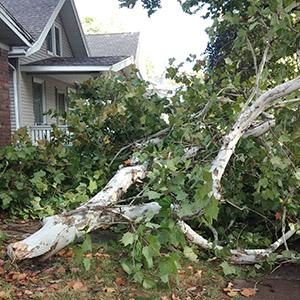 A tree down in Cedar Rapids.

Cedar Rapids continues to dig out from under the large number of trees that were blown down by Monday’s storm.

City spokesperson, Maria Johnson, says they had 98 percent of the city without power and the return is slow.

“We have seen very limited power coming back on in some areas, I think we still have a lot down throughout the city,” Johnson says. She told Radio Iowa Wednesday that the city turned to a wintertime tool to help clear things.

“We actually had snowplows out on the streets to clear streets and make them as passable as possible,” Johnson says. “And now we are working on cleanup and that will be a multistage process.” She says they’ve worked to be sure everyone has a safe place to stay.

She says they’ve worked with Linn County Emergency Management, the Red Cross and United Way to give people options if they need shelter and food.  Johnson says many of the grocery stores had generators and were able to stay open and provide food. The city has been under a curfew from 10 p-m until 6 a-m.

The curfew will stay in place until further notice — likely until we have electricity back,” Johnson says. “With no street lights on the streets and power lines that are still broken and hanging in some areas, and trees that are blocking streets in some areas where we couldn’t move them because of the power lines.  We just wanted to that people weren’t navigating the streets.”  She says getting through the streets in the daytime is a challenge enough.

“A lot of stop signs are also down — so every intersection need to be treated as a four-way stop — which can make it slow to get through town,” she says. Residents are allowed to travel to and from work during the curfew. Johnson says there was one breakthrough Wednesday that has helped the mood of people.

“Started to get cell service back — it’s still spotty. I think people will be a lot happier once they have more opportunities for communicating — that’s been a huge challenge for everyone in the community when you’re so used to having access to phones and the internet and that goes away, that can be a  difficult situation,” Johnson says.

Residents and commercial property owners are encouraged to report the damage to their property using an online form created by the State of Iowa, so they can get a handle on the amount of damage. This form does not take the place of an insurance claim.