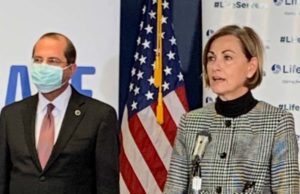 After three consecutive days of escalation, the number of Covid patients in Iowa hospitals has fallen slightly from Wednesday’s record level.

On Thursday evening, the state website indicated 468 patients were being treated for Covid. That’s nearly twice as many as were hospitalized two months ago. Governor Kim Reynolds suspended all elective surgeries for several weeks at the beginning of the pandemic, but Reynolds said that’s not necessary now.

“Our hospitals have indicated that they’re still doing ok,” she said during a Wednesday news conference. “They’re managing it.”

However, Reynolds indicated the state is seeing “significant spread” of the virus.

“Before we were able to really tie that to maybe a nursing home outbreak or a manufacturing plant and now what we’re seeing is more community spread throughout the state,” Reynolds said, “and we’re seeing more of our hospitals, in general, seeing an uptick in numbers.”

The U.S. Secretary of Health and Human Services was in Des Moines yesterday, warning the rising number of Covid cases in Iowa is “concerning.” Secretary Alex Azar advised against “casual household gatherings” among relatives, neighbors, and friends.

Dr. Theresa Brennan is chief medical officer for the University of Iowa Hospitals and Clinics, the first facility in the state to treat Covid patients last March. Brennan said her hospital is currently averaging between 20 and 30 Covid patients each day.

Dr. Brennan and her team monitor their supply of face masks and other personal protective equipment on a daily basis.

“Making sure we have enough for our people — and right now we do,” Brennan said,  “But, as we saw in the beginning of the pandemic, those supplies may not be guaranteed and so we continue to watch them very closely.”

The governor’s current public health proclamation advises Iowans to ensure there’s enough room for social distancing for gatherings of 10 or more people. Thousands gathered outside Wednesday night for President Trump’s campaign rally at the Des Moines Airport. Reynolds told reporters believes proper precautions were taken and those who attended had a First Amendment right to do so.

“We continue to say social distance. If you can’t, wear a face mask,” Reynolds said. “I had mine on. I was role modeling that’s what you’re supposed to do. Many of the individuals that were there had the face masks on, but much as they’ve done throughout the summer with other peaceful gatherings, at our churches, it is the rights of Americans to do that.”

In March, at the beginning of the pandemic, Reynolds issued a moratorium on large gatherings for religious services but lifted it at the end of April.