You are here: Home / Military / USS Iowa submarine will be first built for coed crew 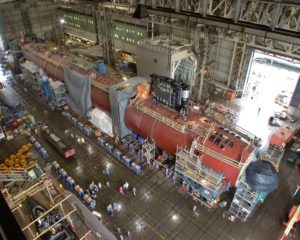 When the U.S. Navy submarine that’ll be named after the state of Iowa sets sail for patrol duty in about two years, it will have an important distinction from all previous vessels in the fleet, according to Tom Hudson, executive director of the USS Iowa’s commissioning committee.

Space is at a premium onboard a submarine, Hudson says, with practically every square inch serving a specific purpose. That’s why it’s so monumental for women to have their own space onboard the sub.

“Curtains typically separate the berthing quarters from main passageways but in this case, there will be specific doors, hard doors, bifold accordion doors like you’d find on an airplane,” Hudson says. “There’ll be separate berthing quarters, or sleeping quarters, and also shower and bathroom facilities, specifically for females.”

The submarine will have a crew of 120 enlisted personnel and 14 officers. Eventually, between 20 and 40-percent of the crew will be female, but Hudson says the premier crew will be more lopsided toward men with perhaps just ten-percent female.

“Right now, Iowa is slated to have one female officer arriving and reporting for duty this next month in August,” Hudson says. “By the time she goes to sea, probably one to two officers, one or two senior enlisted and one or two junior enlisted at this point.”

The USS Iowa will be christened in Connecticut in the spring of 2022, but it likely won’t be commissioned and begin patrol duties until the summer of 2023 — an event which Hudson hopes will take place in Los Angeles Harbor beside the previous USS Iowa, the retired battleship.

Parts of USS Iowa submarine coming together in Connecticut