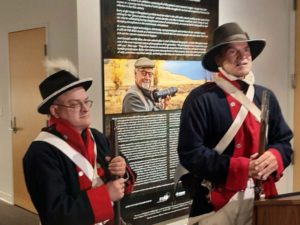 Today marks the 217th anniversary of the death of Sergeant Charles Floyd the only member of the Lewis and Clark expedition to die.

Floyd became ill and died at the encampment along the Missouri River at the area that would later become Sioux City. Floyd’s remains are buried beneath a monument on the bluff overlooking the river along Interstate 29 — and this weekend an 1804 living history camp is underway at the site.

Denny Leonard portrays expedition member Sergeant John Ordway in the Floyd honor guard. He says the honor guard was created just before the bicentennial of the death of Floyd and many of the members have equipment that is their own. Leonard says they will have a reenactment of the burial of Floyd after he died around noon.

He says they took his body to the nearest bluff and buried him that evening. “It’s very moving, the ceremony at six o’clock up on top of the monument, you have the whole panorama of the river,” Leonard says. “We can look down the river where Sergeant Floyd probably passed away. And then we can look up the river where the expedition is going to be heading for the next two years.” Around 20 members of the group will camp on the grounds of the Sergeant Floyd Riverboat Museum and Welcome Center on the riverfront. They will show what life was like at the time.