You are here: Home / News / State Trooper to be laid to rest today 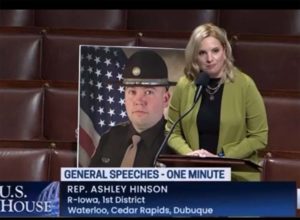 Iowa Congresswoman, Ashley Hinson, spoke about Benda’s death on the floor of the U.S. House Tuesday.
“This is a devastating loss of a father, husband, son, friend, mentor, and dedicated public servant who made it his life’s mission to keep his community safe in Iowa,” Hinson says. “This tragedy is a reminder that brave law enforcement officers often sacrifice for a purpose far greater than themselves,” she says.

Hinson wrapped up her brief remarks with condolences to Benda’s family. “I join all Iowans in mourning the loss of Trooper Ted Benda and my heart is with his family, friends, and fellow troopers during this difficult time,” Hinson says.

Benda’s squad car crashed on October 14th as he was on his way to assist the Clayton County Sheriff’s Office with a wanted suspect. He died six days later in the hospital