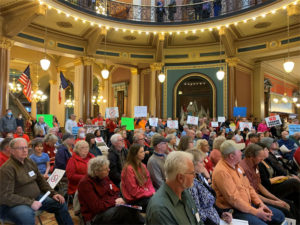 Opponents of proposed carbon pipelines have staged what they’re calling a public hearing in the Iowa Capitol rotunda.

Shelby County Supervisor Steve Kenkle said there’s been little public input and county officials lack the authority to have any say about the projects.

“I call a spade a spade and if it doesn’t make sense or people are not accountable, I ask a lot of questions and so I’ve been at meetings asking questions…I think the process is flawed,” Kenkel said to applause and cheers. “It’s flawed and that’s the reason I’m here.”

Kenkel lives on a century farm near Earling, about a mile from the proposed route for the Summit pipeline. Some of the other speakers were landowners who don’t want to sell easements on their property so the pipelines can pass through. They oppose letting the Iowa Utilities Board invoke eminent domain authority so property can be seized for the projects. Carolyn Raffensperger, executive director of the Science and Environmental Health Network, also addressed the crowd.

“They want to take your property through this unique power of government and hand it over to a private corporation so they that they make their profit using your land…and I say: ‘No!'” Raffensperger said, to extended cheers.

A small group of union members attended the rally with the counter message that there are good-paying jobs connected to pipeline construction.