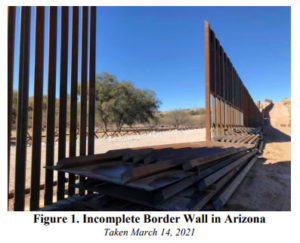 Photo from the report of the U.S. Senate Subcommittee on Government Operations and Border Management.

Iowa Senator Joni Ernst is proposing a bill to use materials stockpiled for the border wall that have been sitting since the Biden administration stopped work on the wall.

The Republican says the federal report shows the government is paying three million dollars a day to keep the materials from being stolen, and her bill would solve that problem too.

“This bill would turn over the unused materials purchased to construct the southern border barrier to any state wishing to finish the job,” Ernst says. “Both Arizona and Texas, for example, have initiated state action to continue construction on their sections of the border wall.”

She says states would apply for the materials. “They would have to certify that those materials were to be used to build that border barrier. So, a state like California couldn’t apply for those unused materials and then turn around and use them in San Francisco for a homeless camp,” according to Ernst.

Ernst says they are working on getting some bipartisan support — especially from states like Arizona — where border crossings have increased. “They are in difficult campaigns. And we see that with Democrats that either reside along the border have those districts that are brought up against the border and those that are facing tough election — because we know the American people are for securing our southern border,” she says. “So we’ll continue to encourage those that are up for election, as well as those that live in those areas to be supportive of the initiative.”

Ernst made her comments during a conference call with reporters.