You are here: Home / Crime / Courts / State Patrol leader says travel will be spread out for 4th 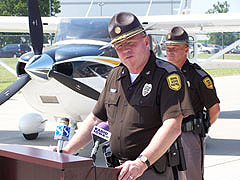 The leader of the Iowa State Patrol says the midweek holiday will make travel times a little different, but extra troopers will still be out on the state’s busiest roadways for the holiday. Colonel Robert Garrison talked with reporters Monday at the Ankeny Airport. (Colonel Garrison shown at right with Lieutenant Mark Stewart)

Garrison says the weekend will be busy, but he believes things will be spread out as people take a long week on either side of the Fourth of July. Garrison says federal funds for the “Combined Accident Reduction Effort” or CARE, will help put more troopers on the road. Garrison was at the Ankeny Airport to show off the patrol’s newest airplane — what he calls an important tool for traffic enforcement.

He says it multiplies their force as they can have a person in the air seeing a long distance and feeding information on all types of violations. Garrison says the officers on the ground save time as they only have to fill out the tickets. Iowa highways leading to lakes, rivers and recreation areas are expected to be the busiest.

Garrison says the place where there are large recreation areas are the places where you’ll see the most traffic. He says individual patrol posts keep track of accident data on the holidays so they know where to focus their efforts and be more efficient. Garrison says officers will be looking for speeding and other traffic violations, seatbelt violations, and drunk drivers.

“In Iowa we are second in the nation for the lowers percent of alcohol related fatalities, but we still have got to get it down farther,” Garrison says seven people died in traffic accidents during the Fourth of July holiday travel period last year.