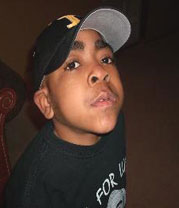 A former Iowa football player and his wife are hoping to find a cure for their son, who suffers from a rare disease. Lew Montgomery and his wife Stacey have four children. Their 10 year old son Lucas has Sanfilippo Syndrome, also known as MPS. It’s a progressive genetic disease for which there’s no known cure. Stacey says it took them five years to correctly diagnose Lucas’ condition.

"He’s lost a lot of his communication skills, he has difficulty with his mobility," Stacey says, "just a wide array of issues that we now know are all part of the syndrome. We just finally found a geneticist that zoned in on what was going on." Lucas requires care nearly 24 hours a day, and some days are better than others.

Stacey says, "Some days he has more joint pain than others, some days he has a more restful night than others, and there’s no determining which way that’s gonna go, it’s all a guessing game." Stacey and Lew are organizing a fund-raising walk called "Laps for Lucas." Last year, the event raised $18,000 for medical research into MPS.

"Our main focus is for awareness," Stacey says, "we really want physicians and the community to be able to see the signs and symptoms so they won’t have to go through such a long journey as we did." Stacey says, while there’s still no cure for MPS, there are some positive treatments.

She says a treatment for the Hunter form of MPS was developed last year, "It’s called enzyme replacement therapy. So, the enzyme that these kids are missing, they’re going every week and replacing this specific enzyme. It’s not a cure, but it’s a hope that it will stop the progression of the disorder – so that’s what we’re hoping will eventually come about for Lucas."