You are here: Home / News / Davenport student hits a string of lottery winners and a million dollar prize 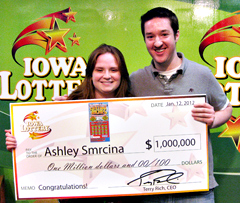 A 22-year-old graduate student in Davenport won’t have any problem paying off her student loans after winning a big Iowa Lottery prize.

Ashley Smrcina, who’s working on her master’s degree in social work at St. Ambrose University, won the top prize of $1 million in the “Lifetime Riches” game.

She bought the $20 ticket and scratched it off while doing research for a school paper at restaurant. “I couldn’t breathe and was crying at the same time,” Smrcina said after realizing how much she’d won.

“The waitress came over and asked, ‘are you okay?’ I said ‘I’m fine.’ But, she came over later and I was just staring at (the ticket) and crying. I said, ‘I think I just won a lot of money, but don’t tell anybody.'”

Smrcina, who moved to Iowa from Michigan in July, claimed her prize Thursday at Iowa Lottery headquarters in Des Moines. “It feels surreal,” Smrcina said. “I can’t believe it. We’ve been here for such a short time. It still gives me goosebumps.”

Smrcina said she took a break from her research at the restaurant and crossed the street to a convenience store. She initially won a $20 prize on a $5 scratch ticket. She then bought a $10 ticket and won $300. The clerk talked Smrcina into buying the $20 ticket which netted the $1 million prize.

Smrcina said that she especially looks forward to the fact that her lottery winnings will make her student loans “just disappear.”