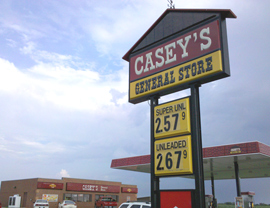 The Ankeny-based Casey’s convenience store chain announced Monday an inadvertent accounting error that caused them to miss paying more than 31-million dollars in tax during a 31-month period.

Casey’s chief financial officer, Bill Walljasper, talked about the issue during a conference call with reporters. “The error pertained to excise taxes owed since January 1st of 2012 on ethanol the company purchased separately, and then blended with gasoline. Commonly known as splash blending,” Walljasper explained.

He says a tax credit for splash blending expired and was not updated in the company’s accounting process. “This credit of 45 cents per gallon of ethanol more than offset the excise tax of 18.4 cents per gallon,” Walljasper says. “Casey’s was correctly accounting for the excise tax on form 720, and the credit up to the point in time when the blending credit expired on December 31st, 2011.”

Walljasper says the company immediately reported the failure to pay the proper taxes once it was discovered. “The aggregate impact of the unrecorded excise taxes from period of January 1st of 2012 through July 31st of 2014 — including accrued interest — is approximately $31.5 million. During over that period, the impact on Casey’s fully diluted share is approximately four-and-a-half cents in each of the affected quarters,” Walljasper says. Casey’s has paid the IRS $30.4 million dollars in taxes due, along with $1.1 million in interest to resolve the issue.

Casey’s Chairman and CEO Robert Myers, says the company is modifying its information technology system to be sure something like this does not happen again. “The company does not believe that there has been a default of the note promise agreements relating to our outstanding senior notes. Additionally, our long-term growth plans remain intact,” Myers says. “Moreover, this does not impact our financial goals. As such, we remain committed to achieving our 2015 goals, including the margin on our fuel gallons sold.”

“We want to emphasize that Casey’s business remains fundamentally strong as evidenced by our October same store sales numbers,” according to Myers. Casey’s operates roughly 1,800.