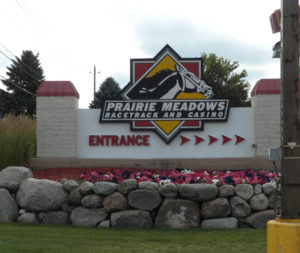 A new report on the economic impact of the horse racing industry on the state is positive, but cautious.

University of Kentucky researcher Alison Davis conducted the study which shows the economic impact of horse racing on Iowa is nearly $197 million. “I was impressed with the overall impact. For a state like Iowa to have an economic impact of about 200 million dollars was pretty significant,” Davis says.

Davis says some of the economic impact may be under reported due to a lack of data. She says in the report that $143 million of the output was generated by the thoroughbred racing industry — with $29 million of that from the Prairie Meadows Racetrack and Casino in Altoona.

“To see how Pairie Meadows Casino and their parimutuel activity compared to the actual thoroughbred racing and their expenses, I said certainly indicated the importance of the equine component of horse racing and also the support of the casino,” Davis says. The report finds the industry supports 2,961 fulltime jobs. She says the horse industry is doing well in Iowa, but members of the industry need to be aware of the issues they face.

“Even though those are impressive numbers, horse racing as an industry is facing challenges, not just here, but in other places. But certainly we saw the numbers where horse farms were decreasing, number of horses (decreasing). To think about those types of challenges where it is because of alternative competition or changes in business model is something to think about. What might happen if it declines more?,” Davis says.

The number of horse farms in the state has declined in the last five years to 8,921. And the number of horses declined more than 18 percent to 50,816. The economic impact increased by $74 million  when compared to the last major study of the horse industry here in 2008. Davis says it is tough to make a direct comparisons between the two studies the surveys were done differently.

The survey found a majority of those who bred and raced horses made a profit. Davis is a little skeptical of that.  “Coming from Kentucky where we call horse racing a hobby with billions and billions of dollars involved — usually its a very tight margin,” according to Davis. “Depending on the breed, we saw just a slight positive profit, sometimes a slight negative profit. So, it’s not surprising it isn’t as if people are becoming millionaires off of this industry.”

While the Iowa industry is much smaller than Kentucky, or Florida or Texas, she says it is holding its own with similar states.
“I think it does relatively well — I think it is competitive in the midwest region,”she says.

Davis recently presented the study to the Iowa Racing and Gaming Commission.