You are here: Home / Health / Medicine / The heat is on across Iowa 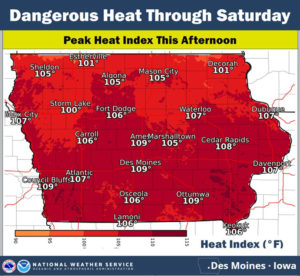 Another hot, muggy day is ahead with most of Iowa under an excessive heat warning, as temperatures will climb into the 90s and heat index values could be as high as 110 degrees.

Meteorologist Paul Fajman, at the National Weather Service, says Iowa is seeing several consecutive steamy days because we’re stuck in a pattern. “We have an upper level ridge in place over the central part of the country,” Fajman says. “That’s providing southerly flow, which is allowing warmer temperatures to advect northward there. This type of pattern, we don’t have a lot of cloud cover either, so we’re getting a lot of daytime heating with the sun.”

The excessive heat warning is posted through Saturday night for all but 16 counties on Iowa’s northern border. Fajman says Sunday may be the first day of relief, as temperatures may dip below 90. Too much exposure to high temperatures can cause heat exhaustion and heat stroke. A person with heat exhaustion may sweat a lot and have muscle cramps.

Heat stroke is more severe: A person’s high body temperature could trigger an altered mental state and seizures. Ed Piasecki, a family nurse practitioner with UnityPoint in Urbandale, says they see a lot of both cases in urgent care.

“Somebody will pass out and they’re concerned they’ve had something wrong with their heart,” Piasecki says. “They often don’t realize that heat is a powerful precipitator of events such as passing out or fainting.” Piasecki says heat-related illnesses can be prevented by hydrating with lots of water and tea, and spending time in cooler, shaded areas.