You are here: Home / News / Governor says 43% of Iowans with COVID-19 have recovered 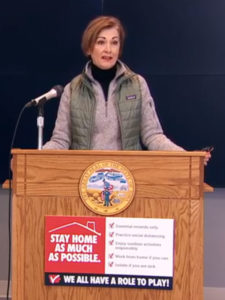 More than 1,700 Iowans have so far tested positive for COVID-19 and the governor on Monday said 43 percent of them have recovered from the virus — meaning it’s been at least seven days since symptoms began and they’ve been fever-free for at least 72 hours.

The State of Iowa has hired the University of Iowa’s College of Public Health to help predict when the turning point may be in COVID-19 cases in Iowa. Governor Reynolds said models from other sources vary widely and haven’t fully accounted for the steps taken here to limit the spread of the virus.

“I want to open up this state, you know, as soon as we can, but I want to do it in a responsible manner,” Reynolds” said. “We don’t want to open it up, just to have to shut things down again, so we have to be very consistent and again be relying on some data before we’re able to do that.”

The Associated Press reports the contract was signed a week ago and forbids university researchers from releasing information about the work unless the state medical director approves. Governor Reynolds said “at some point” the information will be released to the public.

“This is a model and models are only as good as the assumptions we feed into them,” Reynolds said. “…The University of Iowa has been phenomenal partner throughout all of this. We look forward to taking a look at what some of those recommendations are.”

The number of Iowans hospitalized for treatment of the virus increased about eight percent from Saturday to Sunday. State officials reported on Monday that 43 Iowans have died of COVID-19. Almost 19,000 COVID-19 tests have been administered in Iowa since early March and nearly 17,000 have come back negative.